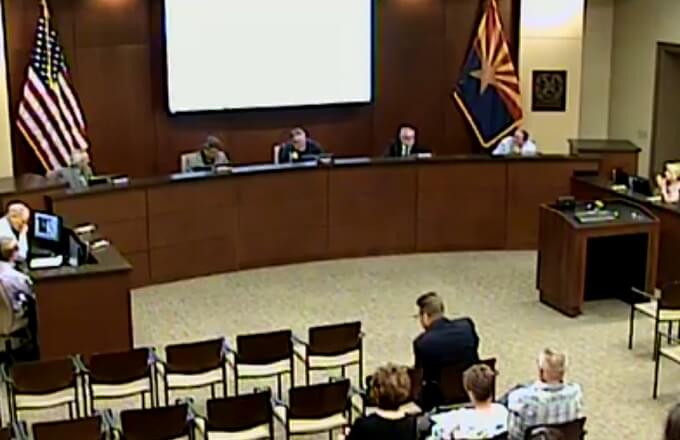 The Pinal County Board of Supervisors called a special meeting April 23, 2018 to address two of San Tan Valley's most contentious topics - Incorporation and Johnson Utilities.

About a dozen or so residents attended the meeting and several seemed confused as to what the meeting was about.

Chairman House opened up the meeting with the first agenda item:

(Consideration/Approval/Disapproval of the following:) (1) Discussion/approval/disapproval of Resolution No. 042318-STV concerning Petition for Incorporation of the "Town of San Tan Valley," Election Department Petition PC I20171006. (Chris Keller/Kent Volkmer)

Chris Keller, Assistant Pinal County attorney stated that the point of the resolution in front of the Board was to put the interested parties and the public on notice that there was a lack of valid signatures for placement on a ballot therefore depriving the Board of Supervisors of jurisdiction to take any action on said petition.

Kay Bigelow, the attorney working with the Vote San Tan Valley Steering Committee was the only person to speak on the issue. Bigelow asked for the Board to postpone the vote on the resolution as they had not had enough time to review the signatures or the result. "This information came in last Thursday afternoon, Ms Forney (the Elections Dept Director) was out of the office Friday," said Bigelow. "I was at the office again this morning at 8 a.m. but Ms Forney is again out of the office and the paperwork is actually at the Coolidge office. Again, I'm just asking that you postpone this vote to allow us time to review the results."

Supervisor Goodman asked Bigelow how much time she'd need. "As soon as we can get the results from the Elections Department," said Bigelow. "This week for sure."

Supervisor Rios asked if voting on this resolution today would add any time restraits for another effort trying to begin. Keller made it clear that since ane election has not been called and a vote has not taken place, "another effort could be filed again tomorrow."

While it appeared that the Supervisors may have been leaning towards delaying the vote, Supervisor Smith asked if delaying the vote was really going to make a difference. Keller explained that there is a challenge period of five (5) days allowed once the signatures are validated and that deadline would be tomorrow, April 24, 2018.  Smith then read this section of the resolution:

Even if the petitions should prevail on a judicial challenge to validity of certain disqualified signatures the Board of Supervisors still does not have jurisdiction to take any action on the petition as a result of various fatal defects, including but not limited to, lack of approving resolutions adopted by the city or town causing the urbanized area to exist, lack of declarant approval from planned community association(s) and other defects in the proposed map.

The Board seemed concerned that any of the issues could be addressed in one day and therefore did not believe that delaying the vote would serve any purpose.

Supervisor Rios made a motion to approve the resolution. Before a second was made, Supervisor Goodman asked for legal council to clarify his role moving forward. Goodman wants to become a mediator for the next effort. Keller stated that Goodman could bring parties together by opening his meeting rooms to allow that to happen, but taking a side is not recommended. Goodman cannot influence the process and cannot take an advocacy role in the process. Goodman then asked the Board to give him the support and authority as Supervisor and the County to advocate that.

Keller stated that this is not on the agenda for discussion today and if the Chairman wanted to add this item to the agenda in the future, he could do so.

After some additional comments by Supervisor Miller, the Board voted 4-1 in favor of the resolution, thereby terminating the current Vote San Tan Valley petition PC I20171006. Supervisor Goodman attempted to abstain from the vote, however was instructed that abstaining is not allowed and his vote would count as a no vote.

The next item was added to the agenda because the Towns of Florence and Queen Creek Supervisor Goodman wanted the Board of Supervisors to start advocating for the Arizona Corporation Commission to assign a third party manager to manage Johnson Utilities and that the interim manager be the Towns of Queen Creek and Florence.

"We should join forces with the Town of Queen Creek and the Town of Florence. They have their dog in the fight. They're calling their own witnesses, to kind of balance the situation out here," said Goodman. "They are actually doing it for people who aren't actually their citizens".

"We've taken a soft approach on our resolution and I believe what Queen Creek and Florence is asking us to do here, is get into this and that's what I'm asking that we look at."

"I personally see a need for an interim manager and I believe Queen Creek and Florence do too."

After Supervisor Goodman's comments, Chairman House did not want to listen to public comment.

House repeated that the Arizona Corporation Commission is the entity that makes these decisions. The Board of Supervisors has no authority to decide on that.

About a half a dozen citizens spoke regarding the effort and all agreed that the Board of Supervisors should advocate for an interim manager, while several were not comfortable with Queen Creek and Florence keeping San Tan Valley residents best interest in mind.

The initial item was amended by Supervisor Rios and with a vote of 3-2, and a resolution was passed that stating that if the ACC decides to appoint an interim manager then the Pinal County Board of Supervisors will advocate in the process of appointing the actual third party.

You can listen to the Board of Supervisors Special Meeting here.